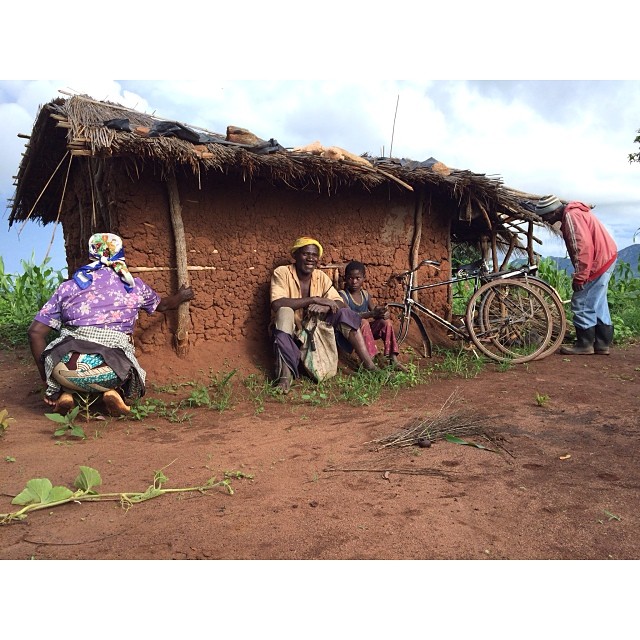 Life can be a bit of an emotional rollercoaster here – it’s probably best summed up in a small collection of completely unrelated stories from this week. Some funny, some a bit annoying, some absolutely heartbreaking and some that leave you feeling a little bit hopeless.

My good friend’s grandma is very sick at the moment. She’s well into her eighties which is pretty remarkable! Over the last week or so she’s been going downhill and despite multiple trips to the hospital looking for answers, she’s not getting any better. I can’t help but wondering when the call to say she’s passed away will come. She’s the lovely lady kneeling in the photo above – I know she would greatly appreciate your prayers for her.

We had a meeting arranged for Tuesday this week with two of the directors from the education department. We had planned to head out to a school to have a community meeting about a project we’re considering helping them with. On Tuesday morning, we received a message from the directors saying that they were in Lichinga so wouldn’t be able to go with us to the meeting but we should still go to their office, their boss was expecting us and he would send someone with us. It’s still hard not to be a bit annoyed… actually it’s not so much annoyed now as bemused… at how things work here. Why would you plan a meeting you know you can’t attend?

Anyway… we went to their office where we found 4 of the other directors so we sat down to chat with them. We explained to them that we had arranged to go to a meeting with their colleagues but they were no longer available but that it was okay because their boss knew all about it and would sort it out. After a few confused looks, we were told that the boss hadn’t come to work that morning, they didn’t know where he was and so began a conversation of who could go with us. There was much discussion about what the plan for the meeting was and who would be best equipped to do it.

The guy who seemed to be leading the group said that he wouldn’t be able to go in the car with us because he would break his fast (Ramadan). I didn’t quite understand the connection between going in a car and breaking his fast so I just asked him straight out why exactly he couldn’t come… then we all had a great chat about car sickness from which he suffers terribly. Eventually someone got hold of the boss who soon arrived apologising for not meeting us earlier saying that he wasn’t feeling well. He quickly appointed two of the directors to accompany us and it turns out that we had a great time and it all went well. So it was fine… just weird.

While we were at the meeting, I had a call from the lady who cleans our house to say that her nephew had died and she needed to leave as soon as possible to get back to Lichinga for his funeral. He was three years old. He slept in a room with his 10 year old sister and 7 year old brother. The light in their room had burnt out the day before so they had a candle beside the bed but nobody remembered to put it out before they went to sleep. At about 11pm it fell over onto the mattress and soon everything was burning. The room filled with smoke and the kids couldn’t find their way to the door to get out. The older two were burnt on their hands and legs, the three year old died in the fire. Neighbours, and eventually their parents heard them screaming and managed to get them out… but not in time.

Cam’s pretty excited about his farm that the chief said he can have! He missed out the best part of the story though. His (our) initial plan was to farm a little plot of land between our house and the road. We thought it would be perfect – close to home so it’s not too much of a hassle to travel there and back, close to the road so that we’d get people passing by and chatting and the soil seems ok. A few weeks back when we went and sat with all of the older people in the village as they waited for their pension payment, Cam started telling the blokes (sitting just across the road) about his plans to farm on our land. All of us ladies could here the conversation and it wasn’t long before everyone was in stitches. It was the funniest idea they’d heard in a long time it seemed. It turns out we didn’t account for the fact that at certain times of the year – the mountainside that we live on is overrun with baboons. They would tear a farm to shreds.

I hate to think just how many other things we do that we think are wonderful to start with but are just destined to fail!